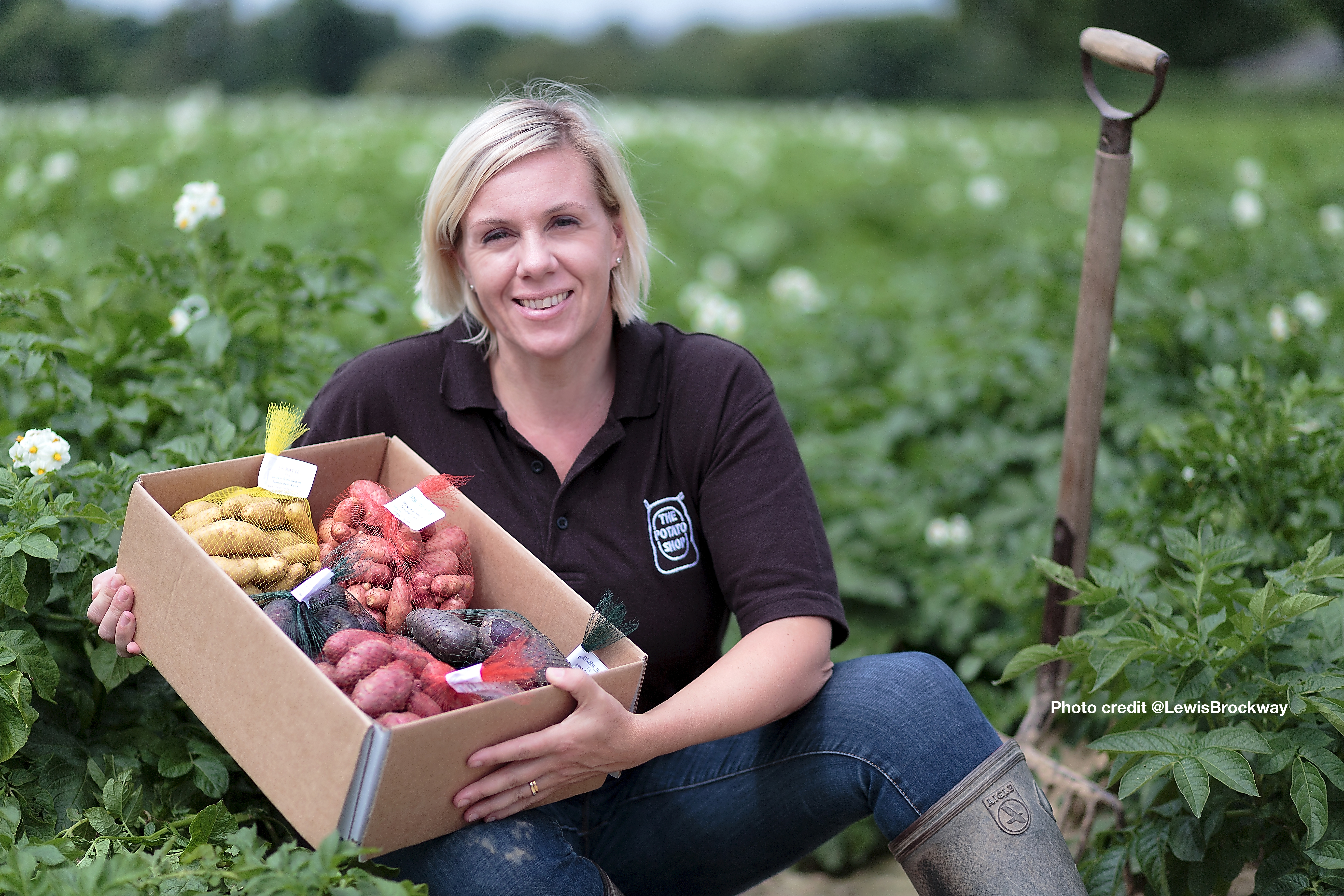 Why would a potato shop need a multi-coloured logo? And does locally-grown produce need a locally-grown designer? Writer Fiona Thompson finds out.

Nicky’s official job title is ‘Queen of all things Potato’ at Morghew Park Estate in Tenterden. Morghew covers 1,900 acres of beautiful Kent countryside and is the South East’s largest grower of exotic and heritage potatoes, The Potato Shop.

Browse the site or drop by the Morghew honesty stall, and you’re bound to be inspired to be more adventurous with your cooking. You’ll suddenly want to make a salad with blue Vitelotte potatoes, dip Pink Fir potatoes into a Camembert fondue or rustle up mini hasselbacks to go with your Sunday roast.

From King Edgar to King Edward

Morghew Estate can trace its history back to 968 AD, when King Edgar approved the sale for the grand sum of 1450 pence.

The estate now has an extensive arable farming operation growing wheat and oilseed rape. You can also buy wild garlic from the estate, a bag of freshly-collected nettles to make nettle soup, and delicious honey from the farm’s hives.

But it’s potatoes that are Morghew’s star attraction. “Uniquely, we grow more varieties of potato than anyone else in this area,” says Nicki.

The potato business was the idea of Tom Lewis, who took over the estate in 2001. “Before, Morghew only had a couple of varieties of potato that used to disappear on the back of a lorry to be sold in supermarkets,” says Nicki. “Tom wanted to grow more varieties and sell them to local people. It started with a Fir Apple and progressed from there.”

Since then, there’s been a huge surge of interest in gourmet potatoes. Chefs including Raymond Blanc love the Ratte variety for potato salads, while Skye Gyngell extols the virtues of Arran Pilot and Red Dukes.

And at Morghew, the range of potatoes just keeps expanding. “This year we’ve sown 34 varieties,” says Nicki. “It’s the most we’ve ever grown.”

“We’re trying a couple of Irish varieties, Lumper and Cara, for the first time. We already grow a Highland Burgundy Red, and are also sowing Red Emmalie this year, a red-skinned potato that’s red inside as well. And we’re adding a new variety of purple potato, Violetta, and Mayan Twilight, which is so good roasted or chipped.”

Meanwhile, if you’re looking for a potato variety to mention casually in conversation to a foodie friend, try Inca Bella. According to Nicki, it’s the best roasting potato ever.

Morghew recently asked Dewar Green, web designers based in Tenterden, to refresh their website. Dewar Green recommended that Morghew bring in Vincent Design Consultants to look at the brand, and that’s how Nick Vincent and his team became involved.

“We wanted to make sure that everyone realised that the Potato Shop is part of the Morghew Estate, and to have one overall brand to unify the whole company,” explains Nicki.

“I really enjoyed working with Nick,” she continues. “He’s very easy to talk to and he knows his stuff. From the start, we were on the same wavelength. It was essential to me that the design team was local, and Vincent Design are based near us just outside Ashford in Kent. We wanted someone who would understand both the area and our client base – the people who were going to see the logos.”

“I’d definitely recommend Vincent Design to other retailers and producers in Kent. They get into your brain and your business and seemed to know exactly what I was looking for.”

The process started with brainstorming meetings, and it quickly became clear that people at Morghew liked the original Potato Shop logo, and that it was recognised locally. Vincent Design came back with some different ideas showing a braver look and feel that would also work across the whole estate, including the firewood business and the Morghew shoot. Tom and Nicki then selected the ideas they liked best for further design development.

The chosen idea is a multi-coloured evolution that reflects the diverse range and colours of the gourmet potatoes on offer at The Potato Shop. As part of the project, Vincent Design created a bespoke traditional logotype for Morghew to position the estate as the over-arching brand. Everything about the new look is now more confident and eye-catching, thanks to a wider colour palette and bolder use of typography.

Bringing the brand identity into the 21st century

“Our new branding has definitely brought us up-to-date visually,” says Nicki. “It’s much more modern and attention-grabbing. Customers at our shop and at farmers’ markets have commented that they like the new logo and that the potato sacks really stand out. Meanwhile, our vans with the brand new livery are just about to go out on the road. They’re going to stick out a mile when they drive around – they just look so different from any other food produce trucks you’re likely to see around here!”

If you live in Kent, keep an eye out for those vans. They’re speeding spuds to gourmet potato fans all over the county – and doing it in style.

Fiona Thompson is a London copywriter who writes about food and drink for clients including City Pantry, Corney and Barrow and Orchard Pig. Please find out more about her work at www.wordspring.co.uk